The flight to Paro is one of the most spectacular in entire Himalayas. Flying along the Himalayan range from Kathmandu, the journey offers fascinating views and an exciting descent into the Kingdom. Bhutan’s first gift to you as you disembark from the aircraft will be cool, clean fresh and virgin mountain air. After immigration formalities and baggage collection, you will be met by our representative outside the exit gate, and afterwards drive to Thimphu, the capital town of Bhutan.

On arrival, in Thimphu check-into the hotel. The capital town of Bhutan and the centre of government, religion and commerce, Thimphu is a unique city with unusual mixture of modern development alongside ancient traditions. With the population of about 90,000 it is perhaps still the world’s only capital city without a traffic light.

Overnight at the hotel in Thimphu.

After breakfast, proceed for sightseeing tour of Thimpu, city’s main attractions that includes:

Royal Textile Museum (open between 09:00 am – 04:30 pm during summer and till 03:30 hrs. during winters, closed on weekends and govt. holidays): is worth a visit to get to know the living national art of weaving. Exhibitions introduce the major weaving techniques, styles of local dress and textiles made by women and men.

National Library (open between 09:00 am – 05:00 pm during summer and till 04:00 hrs. during winters, closed on weekends and govt. holidays): The history of Bhutan lies imprinted in archaic texts, which are preserved at the National Library. Besides thousands of manuscripts and ancient texts, the library also has modern academic books and printing blocks for prayer flags.

Institute for Zorig Chusum (open between 09:00 am – 05:00 pm during summer and till 04:00 hrs. during winters, closed on weekends and govt. holidays): Commonly known as Arts & Crafts School or Painting School, the Institute offers a six-year course on the 13 traditional arts and crafts of Bhutan. On a visit, one can see students learning the various skills taught at the school.

(Zorig Chusum is an art school and is periodically closed for exams, summer and winter holidays, if it is closed on your scheduled sightseeing day, we shall replace it with visit to Zangthopelri Lhakhang)

Zangthopelri Lhakhang: The present structure was built in 1960s and although lacking the charm of many of the older temples, Zangthoo pelri still possesses some impressive murals and art treasures and is worthy of a visit. The site of the temple was a former battle ground, and the temple was constructed there in order to pacify energies.

Simply Bhutan Museum: (open between 09:00 am – 05:00 pm) This privately owned museum depicts the ancient Bhutanese architecture which is being lost to modernization.  The uniqueness of the structure is in its composition of the materials used. The structure is built reusing old timber, window and door frames and other items from traditional and old demolished houses.  The best part is the portrayal of the age-old life styles of the Bhutanese people.

Memorial Chorten (open between 09:00 am – 05:00 pm during summer and till 04:00 hrs. during winters): The stupa built in the memory of Bhutan's third King, His Late Majesty, King Jigme Dorji Wangchuk, who is popularly regarded as Father of modern Bhutan.  The paintings and statues inside the monument provide a deep insight into Buddhist philosophy.

Buddha Point or Kuensel Phodrang (open between 09:00 am – 05:00 pm during summer and 09:00- 04:00 hrs. during winters): Located at a short drive from Thimphu city centre, visitors can get a good overview of the Thimphu valley from the Buddha point (Kuensel Phodrang). You can pay your obeisance and offer prayers to the Buddha, the largest statue in the country and then walk around and take a glimpse of the valley.

Changangkha Lhakhang: is one of the oldest monasteries in the Thimphu valley (open between 09:00 am – 1:00 pm and 2:00 pm - 4:00 pm during winters and 5:00 pm during summers). It was built in the 15th century by a descendant of Lama Phajo Drugom Zhipo, the man who spread the Sect Drukpa Kagyu in Bhutan. The main statue at the temple is of Avalokiteswara (the eleven-headed Buddha manifestation with 1000 arms and 1000 eyes). The temple courtyard offers good views over the city of Thimphu.

Conclude the tour of the day with a visit of Trashichhoedzong (open on weekdays after 05:30 pm during summer and after 04:30 pm during winter and during weekends between 09:00 am - 05:00 pm during summer and 09:00 am - 04:00 pm during winter) , “fortress of the glorious religion”. This is the center of government and religion, site of monarch’s throne room and seat of Je Khenpo or Chief Abbot. Built in 1641 by the political and religious unifier of Bhutan, Shabdrung Ngawang Namgyal, it was reconstructed in 1960s in traditional Bhutanese manner, without nails or architectural plans.

After breakfast at hotel, drive to Punakha across Dochula pass (3,O8Om). In Bhutan, the passes are marked by a large Bhutanese Chorten and prayer flag. Dochula pass offers the most spectacular view over the high peaks of the eastern Himalayas on a clear day.

Proceed to visit Punakha Dzong (open between 11:00 am - 1:00 pm and 3:00 pm - 5:00 pm), built strategically at the junction of Pho Chhu and Mo Chhu rivers in 1637, by Shabdrung Ngawang Namgyal to serve as the religious and administrative centre of the region, Punakha Dzong has played an important role in Bhutan's history. Damaged by four catastrophic fires and an earthquake, the Dzong has been fully restored by the present King. The Dzong is open for visitors during Punakha festival and in summer months when the monk body moves to Thimphu.

Later in the day excursion to Chimi Lakhang (open between 09:00 am – 12:00 pm and 1:00 pm - 4:00 pm), situated on a hillock in the centre of the valley, also known as the temple of fertility. It is widely believed that couples who do not have children and wanting one, if they pray at this temple, they are usually blessed with a child very soon. The trail leads across rice fields to the tiny settlement of Pana, meaning ‘field’. A walk through the village near the temple will give you rare glimpses into the daily life and lifestyle of the villagers. After motorable road one has to walk through paddy fields and villages. This is total about 1.1/2 hours walk, both ways.

Return to Thimpu for overnight stay.

After breakfast drive back to Paro en route visit Simtokha Dzong (open between 09:00 am – 05:00 pm during summer and 09:00- 04:00 hrs. during winters), the place of profound tantric teaching, this dzong now houses a school for the study of the Dzongkha language.

Ta Dzong visit shortly followed by a short walk down the trail to visit Rinpung Dzong (open between 09:00 am – 05:00 pm during summer and till 04:00 hrs. during winters, closed on weekends and govt. holidays): meaning (“fortress of the heap of jewels”), which has a long and fascinating history. Along the wooden galleries lining the inner courtyard are fine wall paintings illustrating Buddhist lore such as four friends, the old man of long life, the wheel of life, scenes from the life of Milarepa, Mount. Sumeru and other cosmic Mandala.

Overnight at the hotel in Paro.

After breakfast excursion to Taktshang Monastery (5 hrs hike, open between 09:00 am – 05:00 pm):  It is one of the most famous of Bhutan’s monasteries, perched on the side of a cliff 900m above the Paro valley floor. It is said that Guru Rinpoche arrived here on the back of a tigress and meditated at this monastery and hence it is called ‘Tiger’s Nest’. This site has been recognized as a most sacred place and visited by Shabdrung Ngawang Namgyal in 1646 and now visited by all Bhutanese at least once in their lifetime. On 19 April, 1998, a fire severely damaged the main structure of building but now this Bhutanese jewel has been restored to its original splendor.

On the way back to town stop at Drukgyel Dzong, a fortress where Bhutanese warriors fought Tibetan invaders centuries ago. The snowy dome of sacred Chomolhari, "mountain of goddess'' can be seen in all her glory from the approach road to the Dzong.

Along the way, visit the 7th century Kyichu Lhakhang (open between 09:00 am – 05:00 pm during summer and till 04:00 hrs. during winters): is one of the 108 temples built in the Himalayas by Tibetan King, Songtsen Gampo. The building of this temple marks the introduction of Buddhism in Bhutan.

After breakfast at hotel, drive to Chele la (mountain pass), at an elevation 3,988 meters, considered to be one of the highest motorable passes in Bhutan. About an hour's drive along a thickly-forested road, is this botanical paradise located. The pass provides stunning views of the sacred mountain Jomolhari and Jichu Drake. It is also marked by hundreds of prayer flags fluttering in the wind. Here, visitors can see cascades of wild roses; purple and yellow primulas; and swathes of deep blue iris covering the forest floor. The top of the pass bloom with rhododendrons in a variety of colours-pale pink, deep pink, burnt orange, mauve, white and scarlet.

Later in the day drive back to town. Evening an exploratory walk around main street and market area.

Overnight at the hotel in Paro.

After breakfast, drive to the airport for flight to your onward destination. Our representative will see you off and then bid you farewell. 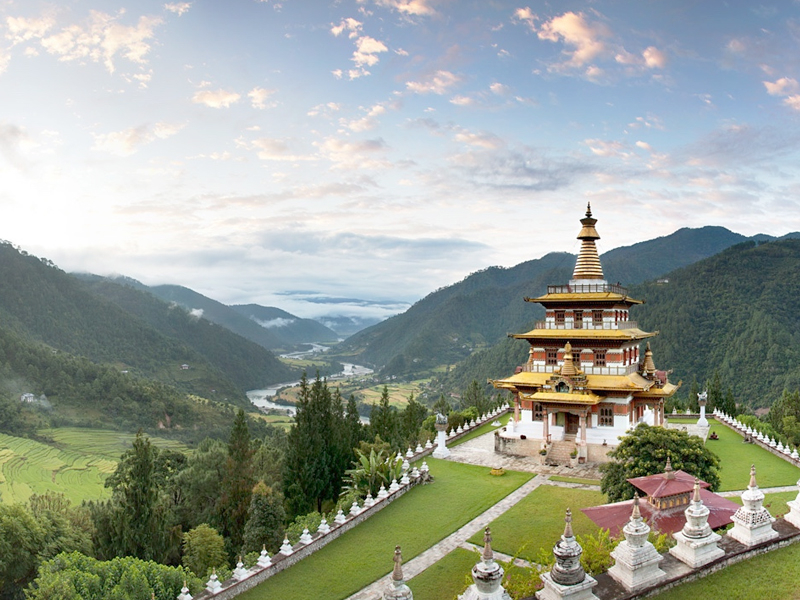 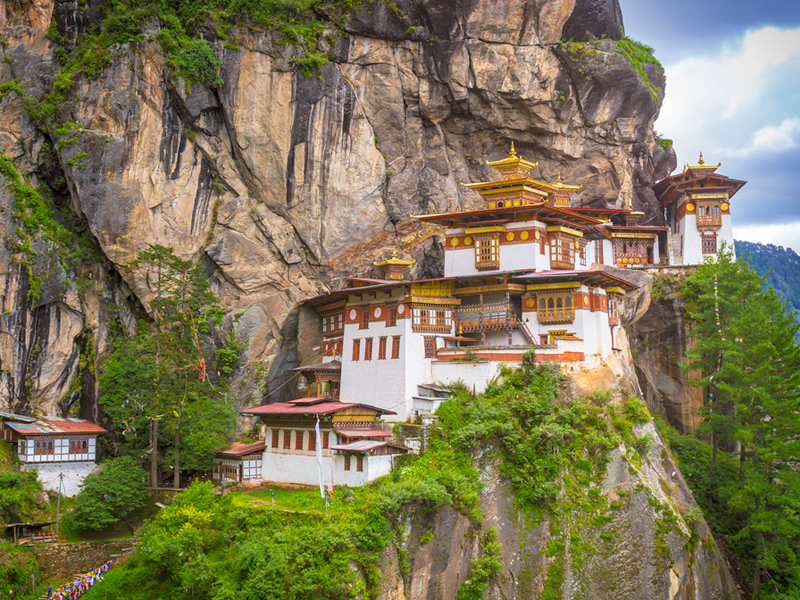 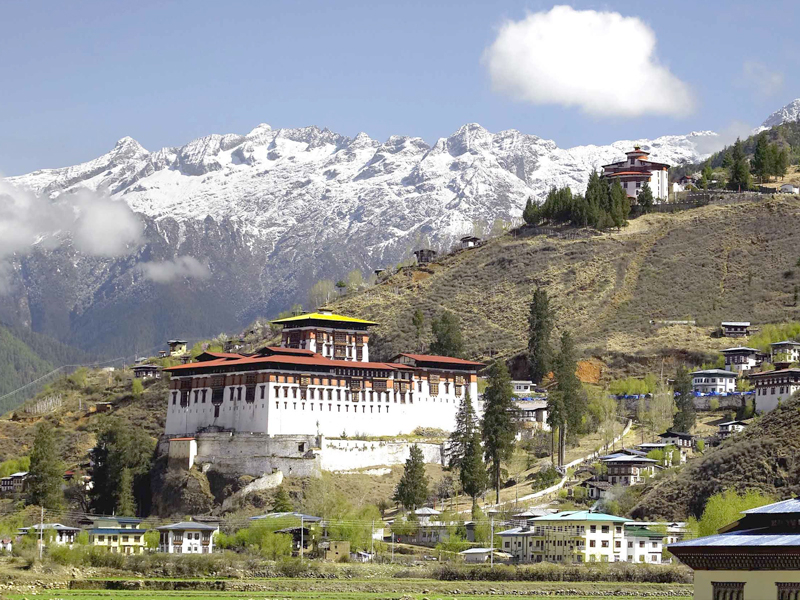 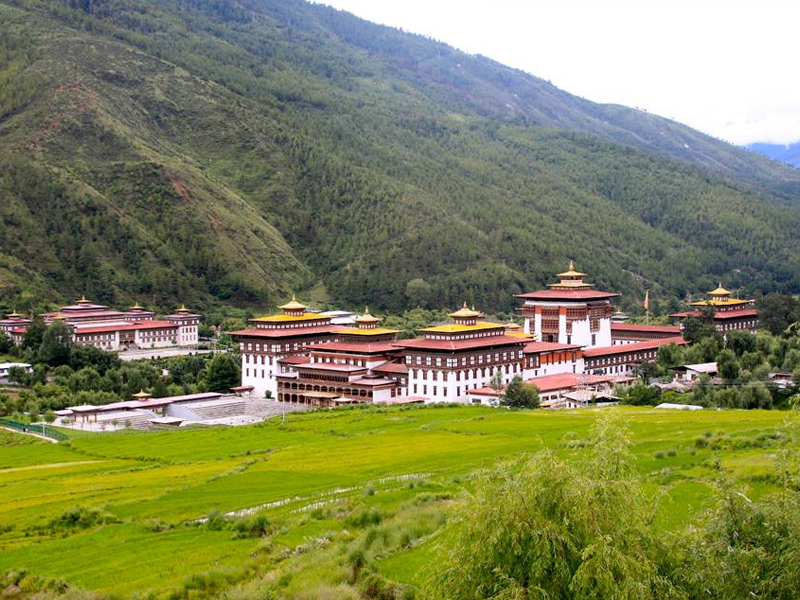 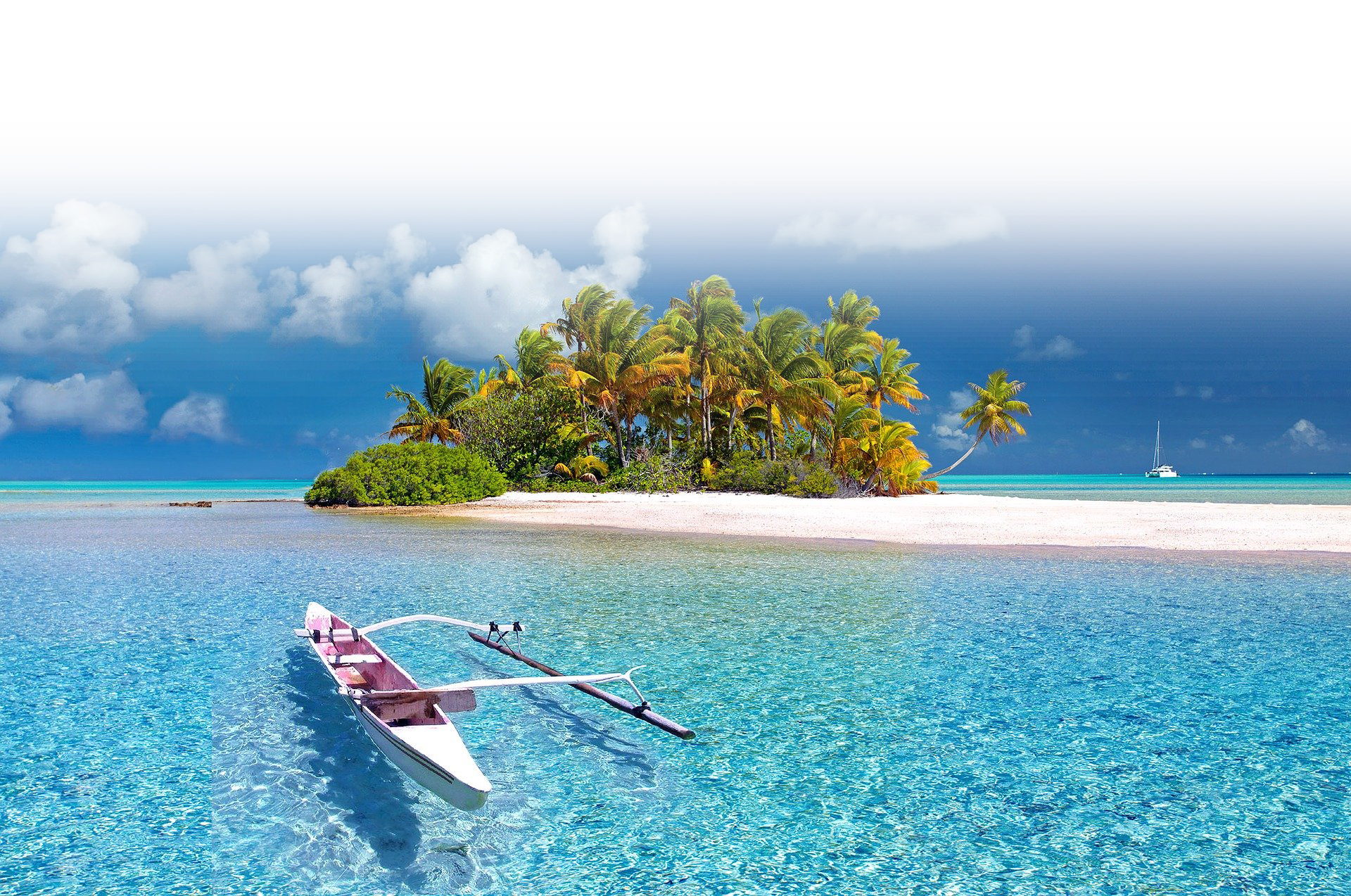